In April 2015 I suddenly found myself getting dizzy as I bent down – to the extent where I actually fell over at one point. I went to see a doctor but didn’t get a diagnosis.

A medical student I know suggested it might be BPPV - Benign Paroxysmal Positional Vertigo, and with that in mind I researched it and found what turned out to be a cure.

I am not medically trained, just an interested observer with a Science background. If you experience issues like the ones I am describing here you should seek medical advice: to determine whether it actually is BPPV, and to obtain properly qualified assistance to deal with it.

As a young student, unsure about whether to go into Biology or Medicine, I became fascinated by the structure of the human inner ear, and studied it extensively for a while. As it turned out there was a question on it for my A-level Zoology examination which I was very happy about!

I’ll skip over the hearing part in this episode, though I still find it fascinating. I am amazed at how it works, and as a tinnitus sufferer, how it malfunctions as you get older. The vestibular system is what I will concentrate on here in order to give insight into the BPPV condition.

Many of the texts used to describe the inner ear contain images such as the one shown here: 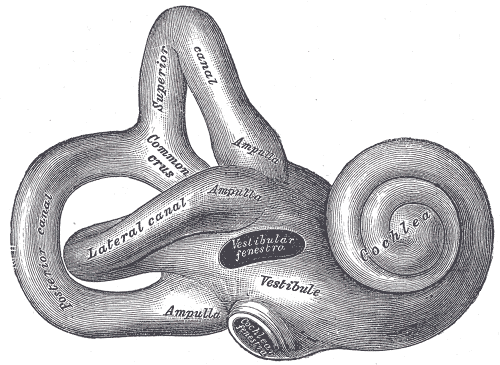 In the past I have misinterpreted this as a separate structure. However, the inner ear actually consists of a series of cavities within the temporal bone of the skull. The various cavities and passages are fluid filled (with perilymph), and within them lie membranous structures also full of fluid (endolymph).

The balance system consists of a chamber called the vestibule with three semicircular canals connected to it. These canals are oriented at right angles to each other and are responsible for sensing rotational movement (pitch, roll and yaw).

There are five sensory areas in this structure. Each of the semicircular canals has an enlarged region called the ampulla containing a collection of sensory cells that detect fluid movement caused by head rotations. There are also two sensory structures in the vestibule called the saccule and the utricle that detect head position in the horizontal and vertical planes.

The sensors in the vestibule are different from the others in that they have calcium carbonate crystals (called variously otoliths, otoconia or statoconia) attached on top. These are acted upon by gravity to provide information about head orientation.

The utricle is in a part of the inner ear which is connected to the semicircular canals. The saccule on the other hand is in a different part of the structure.

What happens in BPPV is that otoliths become dislodged from the utricle and migrate into one of the semicircular canals. Here they disrupt the normal process of sensing head rotation, which causes dizziness (vertigo).

The detachment of otoliths can be caused by a head injury, but its probability of spontaneous occurrence increases with age.

The condition BPPV is called benign in that it is not a threat to health, paroxysmal because it occurs in short bursts, positional because the changing of head position brings it on, and vertigo because it results in a spinning sensation.

Two common conditions will trigger a bout of BPPV: suddenly bending down, or turning over in bed.

The semicircular canals detect head rotation by the movement of fluid (endolymph) across the sensory cells. When the head is moved the fluid lags behind because of inertia, and this fluid movement bends the hairs of the sensory cells. The fluid then catches up and the system stabilises.

The dizziness is actually caused by the fluid movement, or the sensor cells themselves, being affected by the loose otoliths. This changes the normal behaviour of that particular semicircular canal resulting in sensations of movement when there is none.

Normally rotational head movement is linked to eye movement. The eyes compensate for the head movement by moving in the opposite direction, to keep distant images in sight. During BPPV erroneous rotational motion signals are received and the eyes move as they would if the rotation was real. This is called nystagmus and is used as a way of diagnosing BPPV.

I read up about this condition at the time and found there were a number of procedures that could be used to diagnose BPPV and to treat it.

The simplest form of treatment consists of head movements designed to move the displaced otolith(s) from the semicircular canal back into the vestibule. I found a method called the Epley manoeuvre.

Before this manoeuvre can be used effectively it is necessary to determine where the otolith(s) are likely to be - which of the semicircular canals. I worked this out largely by guesswork, which is one reason why I would not recommend anyone else to do it this way. The direction of the nystagmus indicates which ear is affected but it’s difficult to view your own nystagmus.

The severity of the BPPV I experienced was fairly mild. All I suffered from was dizziness, and I managed to cope with it quite well after the first occurrence. I found that performing the Epley Manoeuvre once was sufficient to cure the problem, and since then I have had no recurrence.

I guess that I managed to “hack” my own inner ear more by luck than anything else!