The cost of printing

The reason that printers are so affordable is because like game consoles, they are not. They are sold at cost or below cost. The printer manufacturers make their money by selling you replacement ink cartridges that are very expensive. While you can use replacement cartridges, the manufactures will try and dissuade you from using them by displaying messages in the screens to "alert" you to the fact, or will include chips in their printers to prevent you from refilling or swapping their cartridges for cheaper alternatives. You should consider a laser printer option as while the toner cartridges are more expensive, even those supplied by the manufacturers work out cheaper over time. But if you wish to use a Ink Jet, then a serious alternative to lower the cost of printing is to use a CISS, Continuous ink supply system.

A CISS, Continuous ink supply system, is a system where you use cheaper non brand ink in your printer, just like you would with replacement no-name brand cartridges. Instead of having to refill the cartridges as they empty you supply them via a thin hose to an external reservoir. The advantage is that you can buy your ink in bulk and refill it without having to open the printer. This brings the cost of printing down considerably. 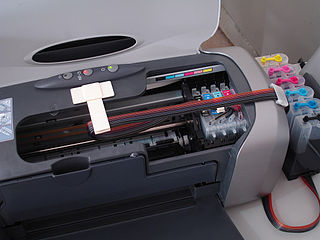 Now to pick a printer

I ended up going with the "Brother MFC-J5910DW" as we were looking for a printer that could scan to the network, print A3, A4 duplex, as well as supporting Linux. At the time of writhing the Brother printers do not use any chips and allow you to replace the cartridges. One annoying thing was that when the ink in one of the supplied cartridges went empty (after printing 10 A3 pages), it no longer allowed me to scan to the network. Fortunately I had the CISS system ready to rock and to be honest I was dreading installing it.

Even if you don't want to purchase your CISS system from City Ink Express, you should have a look at their videos. For my printer there were three that were appropriate, namely how to Fill and prime it, how to install it and (for the future) how to refill it. I'm not going to waste time on my experiences as I have nothing to add to the videos other than to say, you may want to put on a pair of gloves and do your work over a news paper to capture any ink that spills.

how to top up a brother ciss

I'm not using the system or the printer long enough to give a full review but the CISS system has saved two birthday parties so not a bad start.