NYbill does a quick review of his favourite multimeter for electronics, the UNI-T UT61E:

A photo of the inside and outside of the meter: 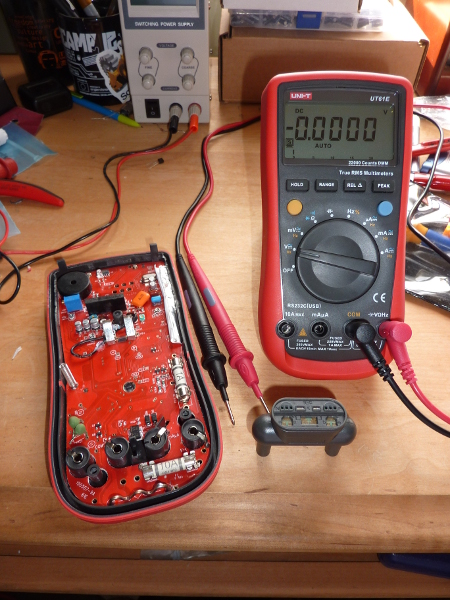 I forgot to mention or show a picture of the data logging cable. I never use this feature so I tend to forget its there.

Great episodes on the Uni-T multimeters.

I have a UT60A, which has an opto-isolated serial port. Sadly the software that comes with it is totally inaccessible to someone who, like me, can't see.

So I've been writing my own to run on Linux.

Admittedly I started this a few years ago and did some initial work on reverse-engineering the protocol, which I can't find documented anywhere.

Hearing these episodes I was prodded into resurrecting the code and completing it.

I have another multimeter which actually talks which is what stopped me completing the project once before.

I think the UT60E, and possibly other models like your UT61E have similar ports and probably have serial ports also.

It's an impressive range of meters given the price.

When I have something completed and talking I'll stick it on the web and do a show.

It would be good to get Blather to respond by making a measurement and reading it out aloud.

Thanks for the kind words, Mike.

That is just an episode I felt like doing because I felt I was a bit harsh on the UNI-T meters. You do get a lot of "bang for your buck" with those units.

And yes, this one has the serial to opto-coupled connector as well. Who has a serial port these days anyway?

I did see they sell a connector that will go to USB for sale. But, as I said in the episode, I don't really feel a need for that feature anyway. However, I'm sure some do.

And yes, if you could get one of these meters going text to speech, that is an episode I'd like to hear.

Having written the first comment I took another look online and found some stuff about the standard DMM chip used inside this meter and all (I think) of the Unit-T meters.

The only problem I think might be the serial port. I am not sure yet whether it will work with either a PL2303 or FTDI USB to serial adaptor since the client software needs to raise either CTS or RTS, or both, to power the opto-couplers in the lead.

If Unit-T sell a USB to meter adaptor lead I'd like to know where to get one.

I particularly like the RMS feature, which you mentioned in the show is uncommon in such a cheap meter.

I'm jealous of your ability to add the timeout power modification though. Could have done that when I could see but not now.

Forever leaving my meters switched on and flattening batteries.

Here is the USB connector, Mike. It says it will work with UT61?. And I see UT60? is listed. I think they are using that question mark like an asterisks.

Its cheap enough. Maybe I'll throw one in the cart on the next Amazon order and see if I can get the UNIT software working with WINE.

/me wonders if Ken or Dave is reading all this in a Community News. Lets be verbose. :P

I'm happy to report that my software works with the meter plugged in to a PL2303 USB to serial adaptor. So either the opto-couplers are being powered somehow else or I have the termio set-up right, or there is some other magic about the adaptor. I didn't think these things supported the hardware handshaking pins.

These good buys that NY Bill keeps bringing up are causing me to spend $.
I bought 2 of the X-61 (and love them) and now this!
Actually need the ability to test capacitors. This can save a bundle! Just ask Flying Rich who lost a bundle.
dw